Research, Studies, and Forest Science.
Below are our resources for interested Ecologists, Legal Professionals, Academics, and anyone else interested in the depths of forest ecology 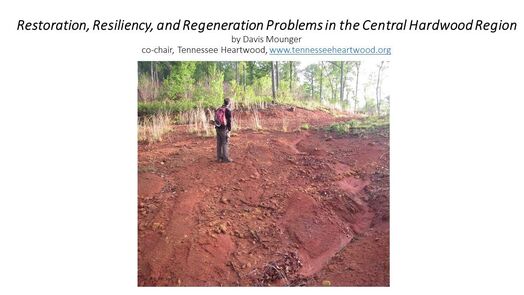 Field Research.﻿   Since we spend a lot of time in the woods, we have begun to gather data of our observations.

The Three R's:  Regeneration, Restoration, and Resiliency as National Forest Logging Rationales.   A look across the Eastern US at how the "Forest Restoration" program has been playing out.  The results are not encouraging.

Misuse of Fire Ecology and Forest Restoration.  Much of the management in National Forests in the East is devoted to "restoration of fire adapted forest communities".  Let's take a look at what that translates to on the ground.

Logging on Sensitive Soils in the Cherokee National Forest.  Tied closely to the "Restoration of Fire Adapted Forest Communities", this presentation is a look a over 20 logging sites in the South Zone of the Cherokee that have what the agency lists as "Soils of Concern".

Research Opportunity for Scientists at Smith Mountain.  We identified and negotiated with the Forest Service a 300 acre burn exclusion zone to provide a baseline site for research into fire ecology and dynamics.

Forest Ecology and White Pine  A report prepared for the Forest Service that addresses the nuances of how to move forward with restoring white-pine monoculture stands that resulted from 20th century land practices.
.
Tennessee State Forests- The Reality on the Ground.  A look at several of our state forests, and how they are being managed for high-intensity logging.
Roads Stuff.  The Wildlands CPR site had hundreds of studies addressing the ecological and economic impacts of the bloated federal lands roads inventory on just about anything.

Forest Ecology.  There's heated debates on what our forests "should be", as they've been pretty badly altered over the last few centuries.  This debate results in changing fads and philosophies towards forest management.

"The vascular flora of an old-growth mixed mesophytic forest." McEwan et al.  Journal of the Torrey Botanical Society 132(4), 2005, pp. 618-627. Inventoried 263 species of flora, with only one being non-native, an  example of the important function of old growth structure being resilient to invasive species.

"External Characteristics of Old Trees in the Eastern Deciduous Forest". Pederson, Neil. Natural Areas Journal, 30(4):396-407. 2010.  Illustrated study on the physical appearance of old growth trees in the East.  Big trees aren't always old growth, and smaller trees sometimes can be.  Real eye-opener for those who look for older forests.

"Pre-Columbian Native American Use of Fire on Southern Appalachian Landscapes." Hazel R. Delcourt and Paul A. Delcourt. Conservation Biology, Vol. 11, No. 4 (Aug., 1997), pp. 1010-1014. Blackwell Publishing for Society for Conservation Biology. One of the studies that form the current "fire-oak hypothesis".  Uses pollen counts from a column of a peat bog in North Carolina.

"Reassessment of the Use of Fire as a Management Tool in Deciduous Forests of Eastern North America". Matlack, Glenn R. Conservation Biology, Volume 27, No. 5, 916–926. 2013. An analysis of some of the more cited research in the fire-oak hypothesis and their limitations.

"Multiple interacting ecosystem drivers: toward an encompassing hypothesis of oak forest dynamics across eastern North America". Ryan W. McEwan, James M. Dyer and Neil Pederson. Ecography 33: 113, 2010. Good analysis of how a convergence of factors in the 19th and 20th centuries has shaped and shifted forest composition, raising a number of problems with trying to  determine what are "natural" forest conditions.

"On the difference in the net ecosystem exchange of CO2 between deciduous and evergreen forests in the
southeastern United States."   Kimberly A. Novick, A. Christopher Oishi, Eric J. Ward,  Mario B.S. Sequiera , Jehn Yih Juang, and Paul C. Stoy. Global Change Biology (2015) 21, 827–842.  The southeastern United States is experiencing a rapid regional increase in the ratio of pine to deciduous forest ecosystemsat the same time it is experiencing changes in climate. This study is focused on exploring how these shifts will affect the carbon sink capacity of southeastern US forests, which we show here are among the strongest carbon
sinks in the continental United States.

Long- and Short-Term Improvements Could Reduce Maintenance Backlog and Enhance System SustainabilityGAO-13-618: Published: Jun 27, 2013. Publicly Released: Jun 27, 2013. The Forest Service has more miles of trail than it has been able to maintain, resulting in a persistent maintenance backlog with a range of negative effects. In fiscal year 2012, the agency reported that it accomplished at least some maintenance on about 37 percent of its 158,000 trail miles and that about one-quarter of its trail miles met the agency's standards. The Forest Service estimated the value of its trail maintenance backlog to be $314 million in fiscal year 2012, with an additional $210 million for annual maintenance, capital improvement, and operations. Trails not maintained to quality standards have a range of negative effects, such as inhibiting trail use and harming natural resources, and deferring maintenance can add to maintenance costs


Forest Service Could Improve Efficiency of Field-Level Timber Sales Management by Maintaining More Detailed DataGAO-07-764: Published: Jun 27, 2007. Publicly Released: Jul 27, 2007. The Forest Service tracks the funds it spends to conduct timber sales--such as funds for personnel and equipment--in a way that does not provide the detailed data many field managers, such as district rangers and forest supervisors, say they need in order to properly manage these sales.

"Money-Losing Timber Sales: Tongass National Forest." Taxpayers for Common Sense.  March 18, 2015.  The USFS has a long history of mismanaging money in the Tongass, with an average loss to taxpayers of $21.7 million per year from 2008-2013. Ongoing timber sale planning could lock in taxpayer losses for many years to come.

A great deal of research has been published in the last decade on the relevance of forests to climate and carbon issues. Here's a link to a folder containing several, with an emphasis on new research on the role of forests in carbon sequestration.
​