Land Between the Lakes:  Grassroots Protectors 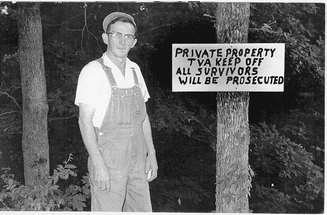 . On the Tennessee-Kentucky border lies a peninsula that was called the Land Between the Rivers.  The community had lived there since the end of the Revolutionary War and had maintained a strong connection to the land.  Its 50,000 acre commons served as the source for the replenishing of game animals in the 1930's, as it was one of the few places in the region that had not depleted itself of wildlife.  In the 1960's, however, the entire community, consisting of thousands of families, was forceably removed by the federal government.  Coinciding with TVA's (Tennessee Valley Authority) creation of Kentucky and Barkley Lakes, a mixture of government officials and land speculators used the power of immenant domain to claim the entire peninsula, with the eventual goal of selling it off for waterfront develpment.
Also deprived of their homes, the Between the Rivers people and their descendents became the land's advocates.  They eventually forced TVA to turn over the land to the Forest Service, creating the Land Between the Lakes National Recreation Area.  However, mismanagement of the land began immediately, with heavy logging and an ill-advised "oak-grassland restoration" project, which infamously become known as "the 8600", after the number of acres of logged and burned scrublands that have produced nothing resembling an oak-grassland.

Locals began to organize to bring reform to the LBL, bringing together Between the Rivers natives, hunters, conservationists, and the full support of many county and state officials.  A day of a "Tour of the 8600" brought hundreds of citizens to the LBL to see the true effects of mismanagement.  Eventually, with the support of Senators Paul and McConnell, the Forest Service began a multi-year moritorium on its timber program to get a fresh start.
For the first time ever, the Forest Service is taking public input seriously at the Land Between the Lakes, with formal and informal consultation with the public during its NEPA project development on topics ranging from ecological restoration to cultural heritage.  It's only a beginning, but a good example of why public input is important to good stewardship of your federal lands.  Let's work to make sure the the public still has a voice in the future.

For more information on the LBL: