Majestic poplars and oaks towering over the forest floor.... a "virgin" forest untouched by people.  That's what sometimes the view of old growth forest.  The reality is far more rewarding and complex. Let's take a look at what old growth really is and the important role it plays.  We'll also clear up some misconceptions that  appear about old growth, and how to identify potential old growth in the wild.​​  Scroll down and find out!

What's Old Growth Like, and Where Can I See It?

Old Growth forests are not just "old trees".  In a sense, the age of trees is a kind of shorthand for the many complex ecological relationships that only time with minimal human disturbance can develop.  True, the benefits of bigger trees are obvious: providing habitat for numerous animals, as a food source, and the well-understood capacity for holding down soil.  Yet low-disturbance forests are also have greater vegetative structure than young tree stands, deeper soils, greater diversity of species, more microhabitats, and greater resilience to natural disturbances.
Other reasons why Old Growth is Important:

Is What I'm Looking At Old Growth?

As we're learning, size doesn't always matter, but there are some telltale signs that you might be in an old growth stand........

First, in the East, many older trees have undergone the stress and competition of having been surrounded by growth around and above.  This results in having to "reach for the sky" and undergo tapering to get good sunlight... 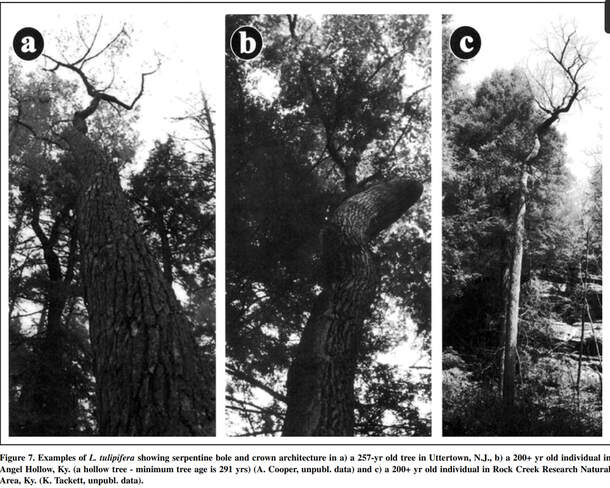 Pictured right are example of Neil Pederson's study  "External Characteristics of Old Trees in the Eastern Deciduous Forest". [2] The "serpentine tapering effect" is common in older trees .While not a guarantee the presences of  a few of these in stand are a good indicator....
Old growth isn't just about  big majestic trees.

The importance of old growth comes from the highly complex, resilient conditions that support healthy populations of many species.  Here are a few of those factors.......

Jim, in his work  "The Development of Old Growth Structural Characteristics in Second-Growth Forests of the Cumberland Plateau, Kentucky, U.S.A." [3]  details several recurring forest structures that typically appear as recovering forests develop into old growth.  Here are three that are not only easy to spot, but so clearly important ecologically (and are places to find lots of cool plant and animal species)! 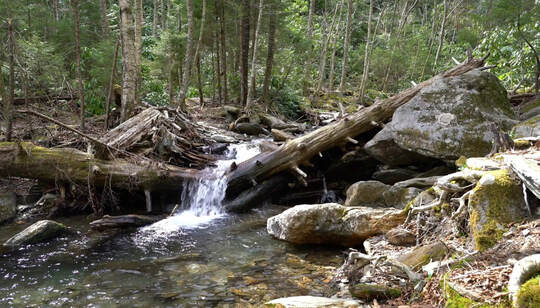 Fallen trees and branches eventually turn into the mulch and topsoil that is the foundation of a land ecosystem.  However, the intermediate period where this wood begins to decay is where important ecological functions take place, from providing habitat for insects, to helping shape aquatic habitats through ponding and shading.  This stream in the Great Smoky National Park relies on CWD to shape hydraulic flow and to help create microhabitats for native brook trout and salamanders.

Forest communities that have developed long enough for several large trees to fall due to natural events are likely to be older, but more importantly, they regenerate the soil  and create small ephemeral ponds that many small invertebrate and vertebrate animals rely on. and serve as watering holes for travelling megafauna.
​
Forest Succession: Where Most of Our Forests Are, and Where They Are Headed
Most of our state and federal forests were reclaimed from abandoned farms, timber companies, and mining companies in the 1920's -1940's.  This places our forests at important transition point.  Some land managers complain of "closed canopy forests" as being low in biodiversity.  This is largely to the effect some lands being relatively young stands that have initiated from land reclamation in the 20th century, but also due to timber management that emphasized even-aged forest stands followed by clearcutting, which has all-but guaranteed this forest composition.  However, this is only a snapshot in time.   In the East,  ice storms, tornados, hurricanes, occasional fire, insects, and other drivers begin to significantly open the canopy, beginning the transition from  a closed, largely- single aged forest to a diverse community of different tree ages, forbs, and fauna.   Dead and decaying trees are vital for providing habitat to countless species, including birds, bear, insects, and more.  They also transition to vital soil nutrients and contribute to moisture retention during droughts.

Typical illustration of how ecologists often model the change in forest composition in our region of forest succession.  Large scale disturbance (natural or human-caused) initiates a stand that becomes dense in the first decades of recovery.  This is called "stem exclusion" because it often inhibits younger tree growth.  However, after a few more decades (typically 70-80 years for drier upland stands, and a bit later for more "mesic" stands), natural disturbance creates gaps in the tree canopy.  From here, biodiversity goes way up, with a mixture of tree ages, and a substantial community of flora on the forest floor.  Much of the public land in the region that was reforested in the 1920s-1940's is undergoing this shift.  If we will let the transition from "closed canopy" continue, our forest communities will enjoy increasing benefits that we associate with old, multi-aged forests.

Where Can I See Known Old Growth Forests?

Most of the old growth forests in the East are gone.  However, there are some remnants left that the public can see, and regular people discover small patches of old growth every year.  You can, too!  And remember, there are lots of places that are maturing into old growth right now!