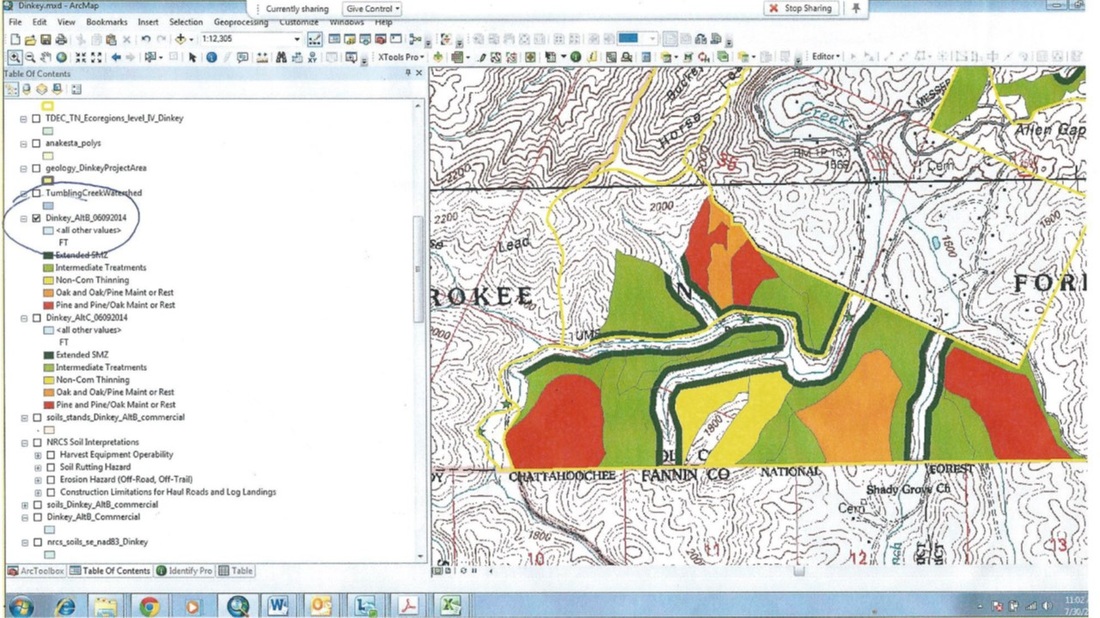 Logging planned for the upper Tumbling Creek.  Red and orange represent a mix of clearcuts and shelterwood/seedtree cuts (where only a few trees are left).  Green is commercial thinning and yellow non-commercial thinning.   Several more cuts will happen a mile downstream.


​The culmination of several years of our work to protect Tumbling Creek-the Dinkey timber sale has been withdrawn! This is why we are here- on the ground, focused watchdogging and advocacy. And that focus includes staying to play a long game when necessary. This sale was first announced in early 2014, and since then, there has been a lot of field work, research, meetings, and legal work. But what made the difference was our long-term monitoring of some of the other timber sales that have happened in the Cherokee, sales with logging similar to what would have happened at Tumbling Creek if the sale had gone through. We did a lot of hiking, photographing, surveying, and videoing, and the results showed that there is a pattern of declining forest health in these sales. It is this evidence that the courts would have found compelling if the agency had not pulled the plug on this case.
So stopping the Tumbling Creek/Dinkey sale is important, but it has launched a whole other body of work that will be important to bringing long-term change to the

The Dinkey Sale area located in Polk County near the Georgia border and would have had significant logging along upper Tumbling Creek:

• 230 acres of clearcuts, shelterwood cuts, and seedtree cuts with burns and herbicides
• 356 acres of midstory thinning with burning and herbicides, including merchantable trees
• 444 acres of cut-and-leave midstory thinning
• 1861 acres of prescribed burning that alternate between dormant and growing season burns between 2-5 years “depending on vegetative response”.
A Four Year Struggle

We began our opposition to the Dinkey sale when it first was proposed in early 2014, with four years of field work, legal comments, meetings, and publicity to get the public aware of the sale.  Early articles can be found here and here.

As it became apparant that Tumbling Creek stood to face the same kinds of impacts to the land that happened only a few miles away at the Hogback Sale, our research into past projects that had heavy logging on Junaluska soils took us all oaver the Hiwassee/Ocoee district and through information gathered under the Freedom of Information Act to understand the ecological and economic impacts on the land.  We found a pattern of failed "shortleaf restoration" that has resulted in numerous logging sites with erosion and and a lack of success in recruiting shortleaf pine and oaks. Presentation here.

We were initially hopeful that we might be able to get the most dangerous sites removed from the proposal, but the hearing of our objection was denied by the forest supervisor, under a spurious use of a clause in National Forest regulations, called the "set aside", claiming that we had failed to make a coherent argument of our concerns over the last four years.  The agency decided to let the project proceed unchanged.

A coalition of groups, including Tennessee Heartwood, the Southern Environmental Law Center, the Sierra Club, and Heartwood, filed suit in early 2018.  Our legal complaint is found here. With a strong case that opposed the sale on ecological and economic grounds, as well as important objections on the rights to public participation on National Forest decisions, we were confident of success.  Apparantly, so was the Forest Service, who decided to withdraw the sale in June, publicized here and here.

We are happy that the long years of work paid off and that, for now at least, Tumbling Creek has been spared.  Thanks to attorneys Shelby Ward and Sam Evans for helping make this possible! 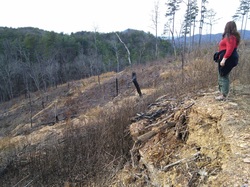 Much of the logging would have been on steep Junaluska soils, like this site of a Cherokee timber sale that happened a couple of years ago a few miles to the west.  Thin topsoil and sensitive soils of this type can be difficult to revegetate.