The History of the Bridgestone

Called "The Grand Canyon of the Cumberlands" by an early 19th-century traveler, the Bridgestone Firestone Centennial Wilderness is being increasingly known for its scenic beauty and recreation opportunities.  From its nine waterfalls to scenic overlook views to numerous hunting opportunities, the Bridgestone has much to offer. 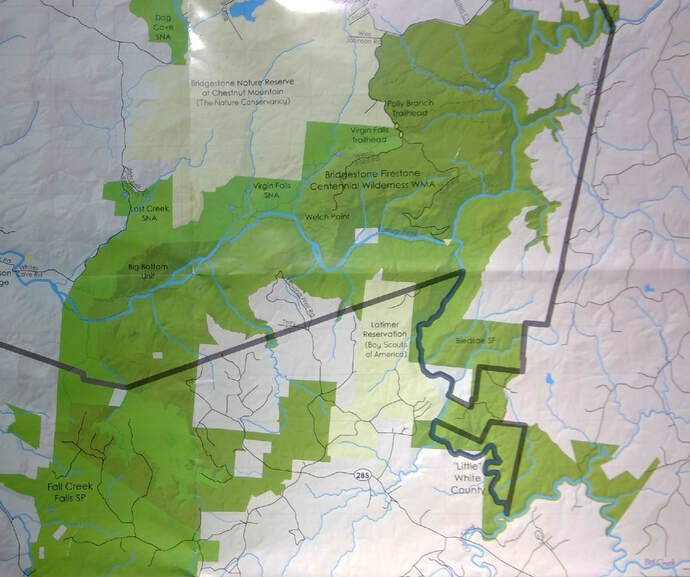 In the 1960's, much of the area was owned by the Bridgestone Firestone Corporation.  The land was generously donated to the state for the Tennessee Wildlife Resources Agency (TWRA) in a covenant that intended for the land to be managed as a wilderness.  The full text of the covenant can be found here.
​
​
1The covenant explains why Bridgestone is considered worthy of protection:
Is the Covenant's Intent Being Followed?

The covenant specifies throughout the text that management activities should be dedicated  "to promote the wilderness nature of the Property": avoiding paved roads and permanent structures, agricultural activities, and mining.  The only provision allowing for TWRA to cut trees is to be on the upland parcel only, essentially for maintaining wildlife openings.  It is unlikely that the writers of the  original restrictions in 2000 had anything more in mind than the small wildlife openings of less than an acre that is typical for deer and turkey, when the idea of quail hunting and management was not even part of the current or past use of the land. It is hard to imagine that the hundreds of acres of clearcutting was the author's idea of "wildlife openings".

While most of the several hundred acres of logging in the projected 1000 acre "savannah" project has been pine monocultures that date from the 1960s and 1970's-era of tree farming, the next stages plan to to go further into the interior hardwood forest.  Once again, this threatens to go well past the intent of the covenant's desire for wilderness values for the Bridgestone.  The public needs to let the TWRA that this goes against the intent of the agreement when this land was donated to preserve wild values. Let them know here.